«Katya EV develops an oeuvre that is made of "discrete performances" to the political charge in the highest sense, but which does not let itself be confined to the simple categories of dissent or protest, nor the slogan. Her common theme is, undoubtedly, the eminent actual question of the relationship to the norm. A relationship that is more moving and evanescent than ever by the exhaustion of grand meta-narratives of legitimation».
Text by Fabrizio Donini Ferretti

«Through setting up research-based site and time specific “dispositifs” (fr. -apparatus), involving performances, processual sculptures or constructed situations, Katya EV’s oeuvre attempts for a poetic transformation of the status quo putting in tension political strength and means for liberation. Her focus lays in the issues of power, anonymity, censorship, state regulations, the relation between the individual and the collective, everyday gestures, freedom and control.

Vasilyeva’s performances seek to interrogate our potential of agency as individuals in specific socio-political contexts. She constructs her “dispositifs” as pluridimensional temporal and spatial whole that gain its strength in their relationship to specific context. Different levels of contextualisation combining the gesture, the place, it’s topography and spacial characteristics, and the event as a social ritual interact to subvert symbols of power to create symbolic intensity.

A powerful paradox of her artworks resides in how the artist allows the context to then take control back over her own construction and their codes. Her performances, intense processual explorations that engage physicality, repetitive work, long-lasting temporalities, and put social and political issues in critical perspective are seeking to trigger a reaction but remain fundamentally open. They create interstitial spaces where answer is never articulated, while political empowerment is engaged through symbolic shifts».
Text by Melanie Weil 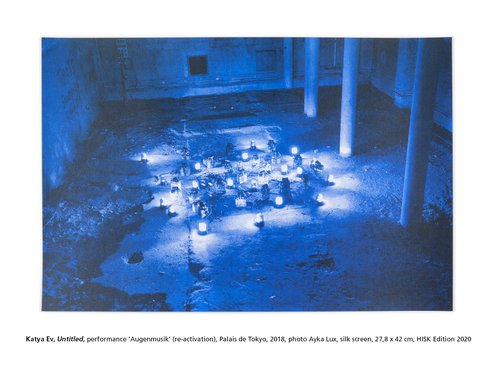