Olivia Hernaïz is a Belgian-Spanish artist born in 1985. She first studied law in Belgium and Argentina. While practicing as a copyright lawyer, she completed a BFA at La Cambre, ENSAV in Brussels. In 2016, she obtained an MFA at Goldsmiths University of London.

In 2017, Hernaïz won the first prize of Art Contest, a leading Belgian competition supported by the Boghossian Foundation. Consequently, she had her first solo show in the Museum of Ixelles in Brussels, entitled As Long As The Sun Follows Its Course.

In winter 2019, she did a residency at Guest Projects, a space founded by Yinka Shonibare Studio in London. Earlier in the year, she was chosen by the Belgian Ministry of Culture (WBI) to be the visual artist in residence at La Cité Internationale des Arts in Paris. In 2018, she was the recipient of a fully funded residency at Can Serrat near Barcelona.

Collecting is a pathology from which I gladly suffer. Through the assemblage of materials – ideas of passersby, derelict houses, political logos, bank slogans and tales – I try to deconstruct collective beliefs. My practice is multiple. From painting and drawing to digital printing, human size installations, model making and sound, the medium depends on the project’s intention.

Dialogue is at the core of my work. My projects are all excuses to start conversations others. These discussions first aroused while painting on the streets during the escapologist project Brussels Anti-Demolition Campaign. I then continued to pursue the dialogue through participatory projects as Would you like to make my portrait? questioning the talent criteria, I had no idea engaging with shared authorship, and the board game Art & and My Career where one can place him/herself in the shoes of women in the art world.

Within the gallery, I explored humour as a subversive tool. In the sister installations, Make Yourself Comfortable and All About You, I called into question the efficiency and legitimacy of human fictions such as politics, money and language. Drawing from the over-identification strategy, both installations and their videos exaggerate the features of the neoliberal system to reveal its dead ends.

Turning to storytelling in my work The Tales, I explored the pervasiveness of the myth of growth on which our western societies are built. As windows opened to another world, the dioramas depict the human quest for the unattainable, hindered by the impossibility of communication. 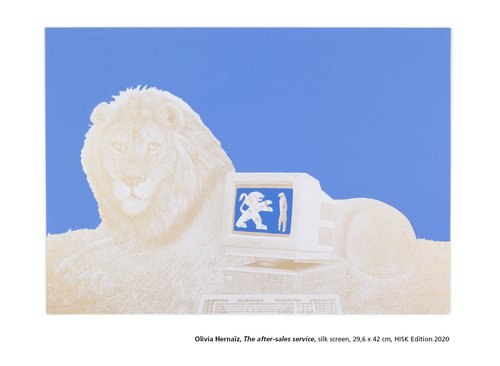