Growing up in Lima and Santiago De Borja – a small village in the Amazon rainforest – Villavicencio moved to Belgium when she was 18 years old. More than a decade later, the clash or moreover, the reconciliation between these cultures, both from different parts of the world, is what defines the artist and her body of work. Animated stories about Inca ancestry, told by her grandfather, and lively memories from her childhood spent in the midst of the Peruvian Amazons, with its own customs and exotic nature, fed Villavicencio’s fascination for her birth country and its pre-Colombian culture. The impressions she feels when returning to visit her mother and the rest of her family are captured by means of analogue photographs, which often function as the foundations of her paintings.

Pizango has her eye on the world. In addition to her Belgian and Peruvian background she finds inspiration in other cultures such as Morocco or Japan but equally in art history with examples such as Picasso, Gauguin, Matisse and Frida Kahlo or Diego Rivera. Moving around like a whirlwind, Pizango paints with natural freedom of expression, using brilliant saturated colors, often painted in layers or mixed on to the canvas. In a deliberate way, she rejects conventional representations. By eliminating perspective and painting in a fast and spontaneous manner, her works are loaded with a bubbly energy. In this sense, her paintings remind of the art historical naïve movement with its great painters such as French artist Henri Rousseau.

Whether she shares the intimate world she grew up in (Salty Rain, this is not a déjà-vu, 2018, Geukens & De Vil) or paints autonomous portraits, Pizango captures her subjects (herself, but equally people she encounters and who inspire her) in a direct manner. She portrays them in a self-created universe of lush vegetation, textiles, pottery, geometrical forms or patterns reminding of the mysterious Nazca Lines. 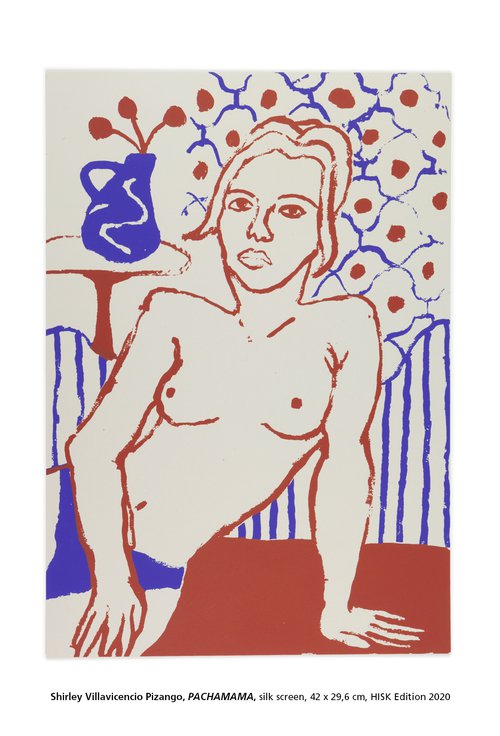